Call of Duty just tweet out the picture of what the Blackout map will look like and it’s pretty big. If you don’t know what is blackout, blackout is the new battle royale mode in Call of Duty: Black Ops 4 and it is the largest battlefield in the history of COD campaign, and is developed with the combination of PlayerUnknown’s Battlegrounds’ Miramar and Erangel maps. The northern and western areas are incorporated into hills, bridges, forests and paved roads while the eastern and southern areas are mountainous desert.

A river dividing two regions, with a massive lake at one end and an ocean on the other end. Nuketown Island is the only landmass in the ocean, joined to the mainland through two bridges. 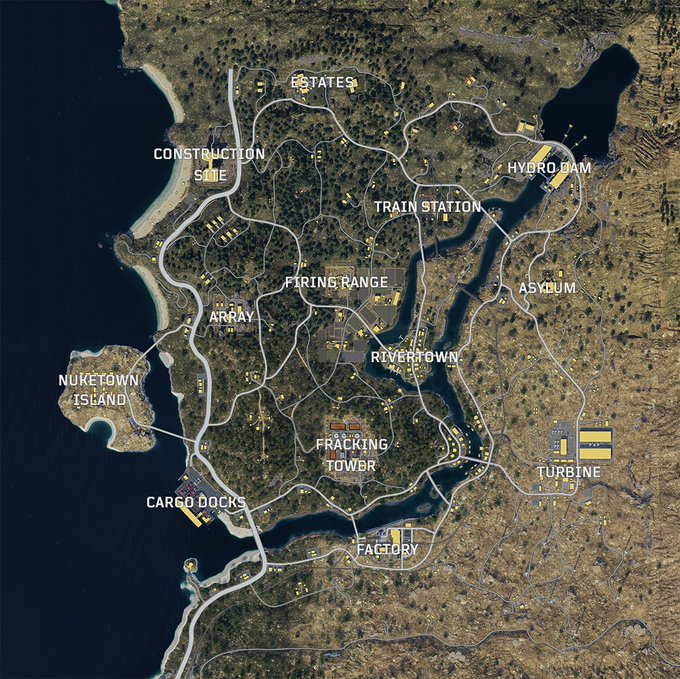 Very similar to PUBG, important landmarks and cities are prominently specified on the map. These are the main locations where you are going to find the best loot and other players as well, very similar to PUBG again. Groups of homes and small societies pepper the ground between the important points. A large majority of the extended landmarks resemble on the forest half of the map, while most of the desert is dotted with singular buildings. You’ll plausibly find better gear and more firefights in the north and west, while the east and south provide good places to hold out as other players kill one another.

The Blackout beta will release on PS4 on September 10 before also releasing on Xbox One and PC on September 14. Throughout the beta, Blackout matches will support 80 players but that hasn’t been confirmed as the final number to appear in the full game.

Call of Duty: Black Ops 4 launches on October 12 for Xbox One, PS4, and PC. The game is throwing stories in a new way this time around and abandoning the traditional single-player campaign for a bunch of solo stories focused around the Specialists.

Best FPS Games You Should Play in 2021

What Went Wrong on Nvidia GeForce RTX 3080: What are the Solutions

How to Select Keyboards In 2022

Are Z690 Motherboards Worth Buying?